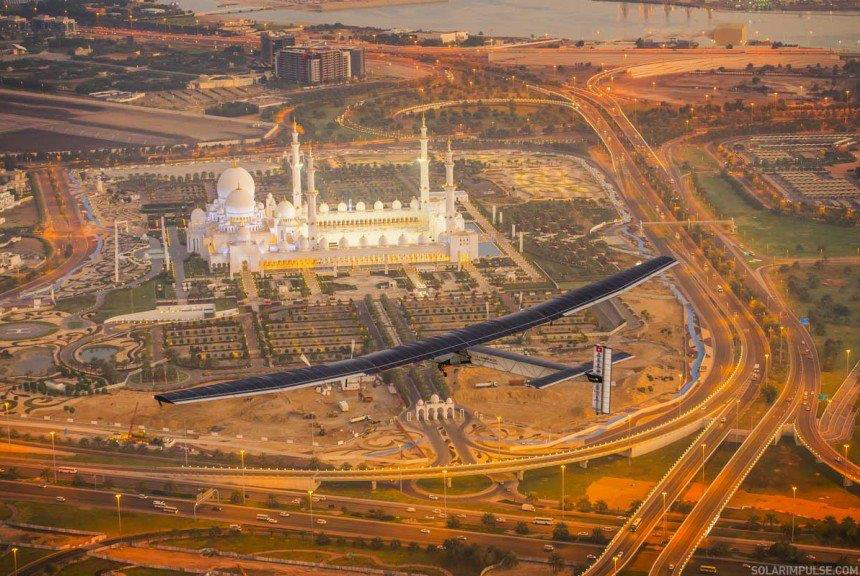 (CNN)The first aircraft powered solely by the sun made its landing into history, reaching Abu Dhabi today, Tuesday 26th July and completing a 42,000km, round-the-world journey that began over a year ago.

The Swiss-engineered Solar Impulse 2 was piloted by Bertrand Piccard on the final part of the epic expedition that took off from Cairo earlier this week. The final stop completes its 17-leg, milestone journey that used only the power of the sun’s rays. “We have now just watched our shared dream unveil, becoming a reality” the Solar Impulse team said in a blog post. “Emotions, tears, relief, exhilaration is what we are all feeling right now after completing the first Round-the-World solar flight in history.”

The lightweight aircraft, which weighs the same as an SUV but has the wingspan of a Boeing 747, is the brainchild of Piccard and Bertrand Borschberg, a Swiss engineer and businessman. The Solar Impulse is a single-seater, so the two men have shared the flying by taking different legs of the journey since March 2015.

Solar Impulse 2 is piloted by Bertrand Piccard, and Andre Borschberg.

“What I’d like to show with my team is that clean technology today is showing incredible goals. You can fly now longer without fuel than with fuel, and you fly with the force of nature, you fly with the sun. It’s the new era now for energy and this is really what we’d like to inspire people to do,” Piccard said.

The plane had earlier secured a place in the record books by being the first plane to cross the Atlantic — from New York’s JFK airport to Seville in Spain, then also piloted by Piccard — without a single drop of fuel. It also set the record for the longest solo flight — five days and five nights — without fuel, from Nagoya in Japan to Hawaii.

The revolutionary voyage, which the team labeled a “13-year exploit,” demonstrates the biggest exploration of energy efficient batteries and clean technology that could potentially alter the way we travel.